King's Speech "I have a dream" 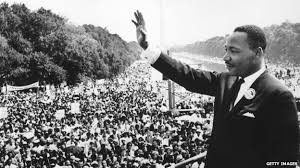 US President Barack Obama has addressed celebrations marking the 50th anniversary of civil rights leader Martin Luther King's "I have a dream" speech.

The "Let Freedom Ring and Call to Action" commemoration took place on the steps of Washington's Lincoln Memorial, the site of King's address on 28 August, 1963.

Mr Obama said King's speech inspired millions of Americans to fight for a more just society and rights that people now take for granted.
"To dismiss the magnitude of this progress, to suggest, as some sometimes do, that little has changed, that dishonours the courage, the sacrifice of those who paid the price to march in those years," Obama said. "But we would dishonour those heroes as well to suggest that the work of this nation is somehow complete," he said, calling economic justice the "unfinished business" of the civil rights battle.
Other speakers included former Presidents Jimmy Carter and Bill Clinton. The ceremony followed an interfaith service at Shiloh Baptist Church in Washington.
The speech by Mr Obama, the first black US president, came as almost half of Americans say much more needs to be done before the colour-blind society that King envisioned is realised.
The Lincoln Memorial ceremony included bell-ringing at 3pm , 50 years to the minute after King ended his call for racial and economic justice with the words "let freedom ring".
About 50 communities or organizations around the US also said they would ring bells. The Swiss city of Lutry and Tokyo also took part. Other organizers included the National Action Network of civil rights leader and talk show host Al Sharpton, the Southern Christian Leadership Conference and the National Council of Churches.
A "Jobs and Justice" march took place before the event. Mr Obama's address wrapped up more than a week of Washington events marking the 50th anniversary of King's address. They included seminars, conferences and a march on Saturday that drew tens of thousands of people urging action on jobs, voting rights and gun violence. "What we must do is we must give our young people dreams again," Mr Sharpton told marchers. King, a black clergyman and advocate of non-violence, was among six organizers of the 1963 "March on Washington for Jobs and Freedom," where he made his address. That address is credited with helping spur passage of the landmark Civil Rights Act of 1964 and the Voting Rights Act the following year. A white prison escapee, James Earl Ray, assassinated the Nobel Peace Prize winner in 1968.
Publié par Aula Cero Idiomas à 07:45 Aucun commentaire: