The story of Ellis Island
The small island in New York Harbor which, for millions of would-be immigrants, was their first experience of the Promised Land.

The year is 1906, the date November 16th. Franz and Ulrike Schumacher and their three children have just disembarked from the Hamburg-Amerika line steamship that has carried them across the stormy North Atlantic Ocean from Germany. 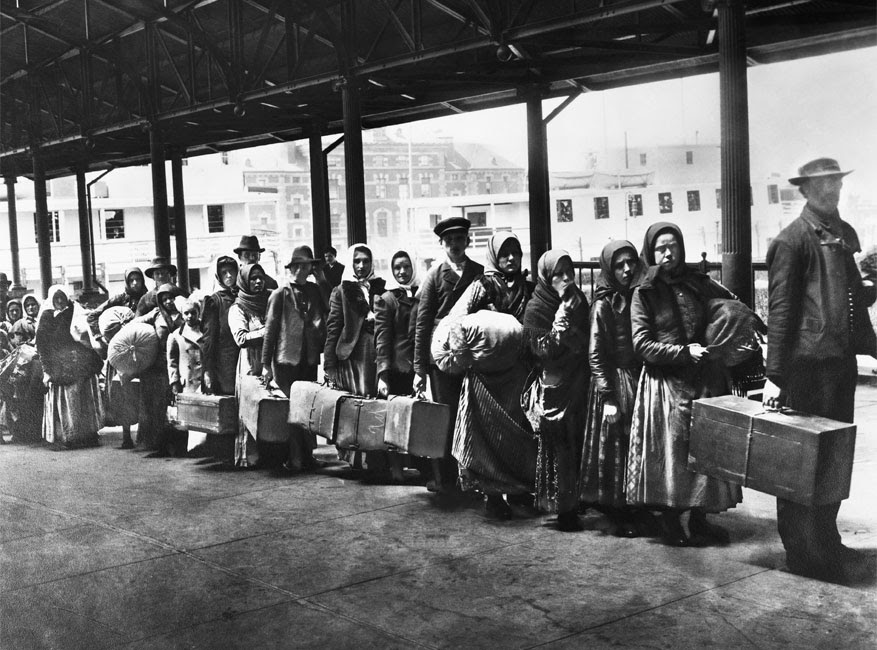 Like the thousands of other people milling around them, they are totally bewildered, caught up in a mixture of hope and apprehension, as they crowd into a vast waiting room. The room sounds like the Tower of Babel, for few of those in it speak a word of English. They speak German, Polish, Dutch, Hungarian, or Russian maybe, yet they have come, seeking a new life in a new world; and now they are on American soil for the first time. This is America! America! Or at least it is Ellis Island.

After interminable hours of waiting, the Schumacher family are finally called to a desk; immigration officials study their papers, and ask them where they intend to go. They don't ask how long they're planning to stay, however, since they know the answer already. All those who pass through Ellis Island -- and that could mean over 11,000 people per day -- are would-be immigrants. They are looking to start a new life in a new world.

For many, passing through Ellis Island was not so much a matter of stepping into a new world, it was stepping into a new life, a new character. And so it was that the man who finally led his family through the door and onto the ferry packed with a jostling crowd of new Americans was not Franz Schumacher any more, but Frank Shoemaker, even if he still didn't understand more than a couple of words of English.
* * *


Ever since the Declaration of Independence in 1776, the United States has been a nation of immigrants. While today the pattern of immigration is not what it used to be  (most immigrants coming from Latin America or Asia)  and immigration policies are now designed to restrict entrance to the USA, things were very different in the early part of the twentieth century.
Ellis Island, almost in the shadow of the Statue of Liberty at the entrance to New York Harbor, was the first stop on American soil for some twelve million immigrants between the years 1892 and 1954. For most, it was "a portal of hope and freedom"; for just a few, it was the "Island of Tears", when they were turned away for failing to meet the various immigration laws and requirements.
During its years of operation, Ellis Island was the principal port of immigration into the United States, processing approximately 75% of all the immigrants into America over the period.
The original three acre island got its name from a previous owner, Samuel Ellis. At the end of the eighteenth century, the State of New York secured the island in order to build fortifications as part of its harbor defense system.


It was in 1890 that that Congress set aside funds to begin improvements on the island, so that a federal immigration station could be built to replace the existing facilities at Castle Garden, in lower Manhattan.

The original island was expanded to several times its size, and the new immigration station opened on January 1st, 1892. Five years later, it was destroyed by fire; but it was soon rebuilt, with an impressive French Renaissance style brick building, which opened for business on December 17th 1900 and processed 2,251 immigrants that very same day. The part of the building whose image remained most clearly marked in the memories of those who passed through, was the vast registry room occupying the whole central section of the second floor; it was here that most of the processing of would-be immigrants took place.

During the next half century, the small island grew to its present size, as it was joined by landfill to three adjacent islands. The main building was supplemented with a power house, kitchens, a hospital and contagious diseases wards, a dormitory building, a bakery and several other structures.
In the early 1920's, though, immigration declined sharply, as restrictive immigration laws were passed. These put an annual ceiling on immigration, and established quotas for each foreign nation. They also made it compulsory for would-be immigrants to fill in papers at the US consulate in their country of origin, rather than on arrival. Thereafter, only those whose papers were not in order, or who needed medical treatment, were sent to Ellis Island.

The facilities were increasingly used for the assembly and deportation of aliens who had entered the USA illegally, or of immigrants who had violated the terms of their admittance. And finally, on November 12th 1954, the Ellis Island immigration station ceased operation.

Now it is open again, but as a museum, to tell the story of a fundamental stage in the making of modern America. The story needs to be told; what better place to tell it than on Ellis Island ?
Publié par Aula Cero Idiomas à 01:48 Aucun commentaire: